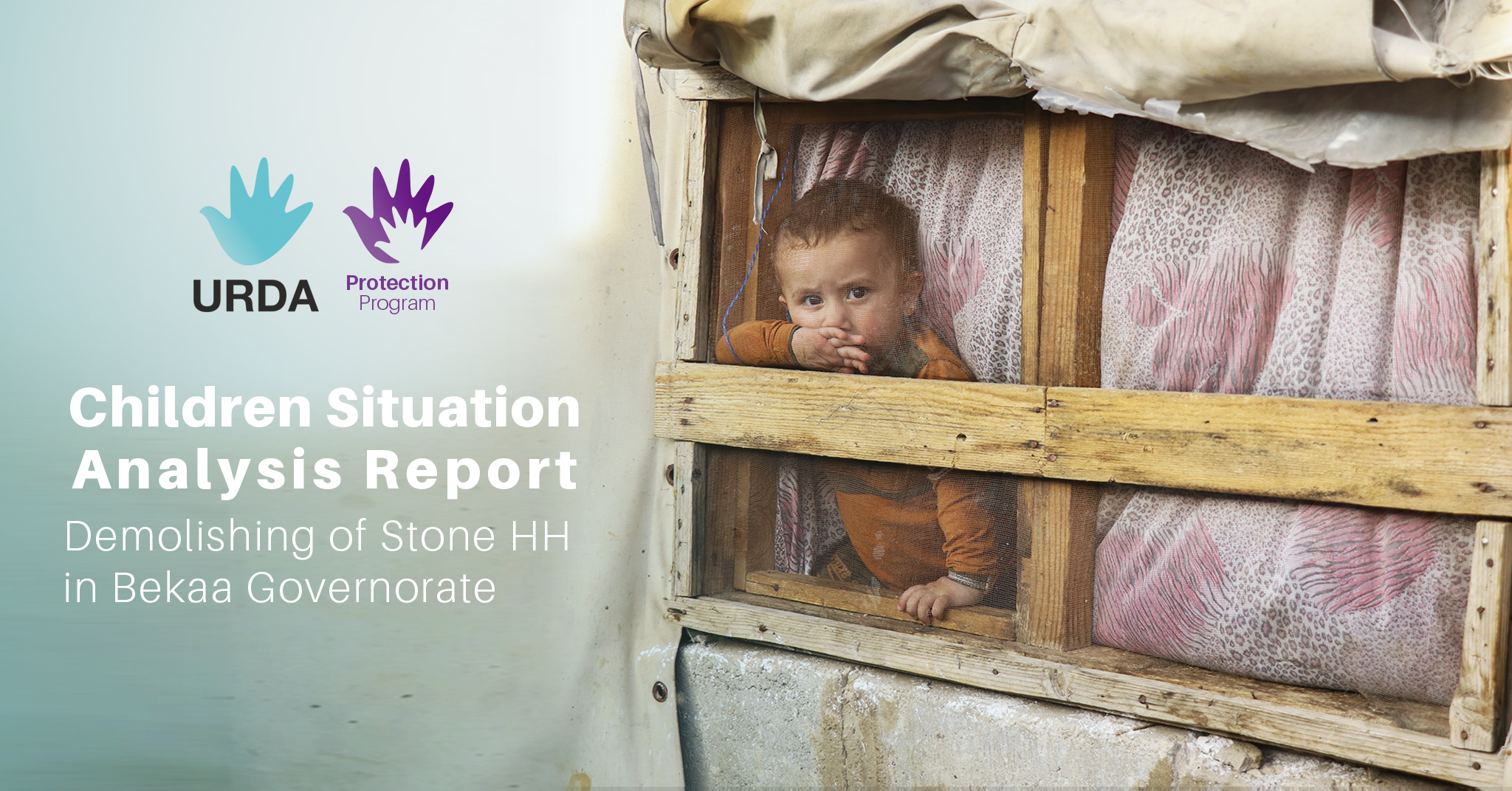 This document constitutes of three sections:

After the Stone Household units’ movement started in Beqaa Governorate and specifically in West Beqaa and Aarsal, URDA was able to witness the harshness and magnitude of the demolishing acts on women, men, elderly, children and adolescents.

People had been living long enough in these household units to create a safe sense of living with known neighbors, access to education, access to healthcare services as well as easy access to food supplies. They used to live in dignified settings with proper living conditions during the freezing cold of winter and the scorching heat of this summer.

After their HH units were demolished, we found that studying the recent conditions of children is of high significance since children are known to be the most fragile and vulnerable in the face of these actions.

In an attempt to collect all the information needed from the families that were directly affected by the demolition acts, our study targeted West Beqaa (Bar Elias) and Aarsal areas since those are the two areas were HH units in URDA-managed shelter sites were demolished.

Each area was studied differently, taking into consideration the context of each.

As for Aarsal, focus group discussions were held in Nour, Hamad, Abrar 3, and Salam shelter sites. One hundred families were gathered by the Protection Team in Aarsal in four focus group discussions to study the effect of the demolishing acts, their solutions, and coping mechanisms and the current situation of children living in those shelters.

The families reported the following:

Now that their HH units are demolished, they have one option which is to co-live with neighbors or relatives, however, due to overcrowding issues, they only get to sleep at neighbors/relatives’ units as long as they spend the day at their demolished HH unit trying to rebuild it into a tent made of wood and plastic sheets.

Children are spending their days among the debris of their demolished homes, playing with stone and ruins under the scorching heat of summer with reports stating that the spaces that used to be playgrounds for children are now locations to gather ruins

Several cases of illness were reported among the children such as extreme diarrhea and fever due to lack of hygiene practices and the intense exposure to sunlight over prolonged periods. 70 out of 120 children from Al Salam shelter site were reported sick, with several cases admitted to the hospital.

Children reported that they no longer attended summer schools that provided educational support on the Lebanese curriculum since they lost their stationary and school belongings during the displacement process or that they now live far away and cannot afford transportation.

Families and children are now living in constant fear of fires that their HH units are made out of plastic sheets. In addition, plastic sheets are causing increased temperatures (higher when compared to the outdoor temperature) making living conditions in the HH units unbearable.

At the hygiene level, children are using the debris of their homes as toilets since they either can not use the toilets inside the tents they are co-living in due to over-crowding and since they spend most of their days playing with the ruins and stone. This behavior is leading to the spread of many diseases and ruining the hygiene systems and policies that families have worked hard to build in their families.

Water tanks have been contaminated with dust and debris, making it unsafe for consumption since it has been reported to cause digestive infections, especially among the children who are still fragile and prone to diseases.

Families left their furniture in the open after their HH units were demolished and now they have become a home to insects and scorpions, making them unfit for use.

The data of all relocated families were entered into a database to be contacted whenever URDA can provide new services. URDA’s Protection Team approached the 16 families that permanently left the shelter site in Beqaa via phone calls to study their needs and the situation of their children.

The families reported the following:

Families reported that their children would not be able to attend the coming academic year if they stay in their new HH units since they are far and cannot afford transportation fees for all their children.

The high temperatures within the new HH units are causing diseases and illnesses among children, thus increasing risks, and financial burdens, especially that healthcare centers are now far and require transportation fees.

Children lack safe places to play and spend their day. The families mentioned that children miss attending the PSS sessions that used to take place in the Child Protection Center in Al Awdeh shelter site, which is operated by the Child Protection Program under URDA’s Protection Sector. They are spending their days within the HH units since they reported that they do not feel safe and are not familiar with the new areas they are residing in.

The families in both areas were asked for what they see as potential solutions and means to reduce the burdens of their new circumstances. The families reported the following:

The vulnerability of the children’s situation has increased on all levels, thus putting them at higher risk of illness, child labor, exploitation, violation of rights, lack of education and hygiene and many more. Children suffer the most when it comes to the extreme actions taken by the government concerning their lives.

It is more than just concrete and stone when it comes to children, it is the concept of life and safety, and watching their homes being demolished is just history repeating itself and them re-experiencing what happened in Syria all over again.