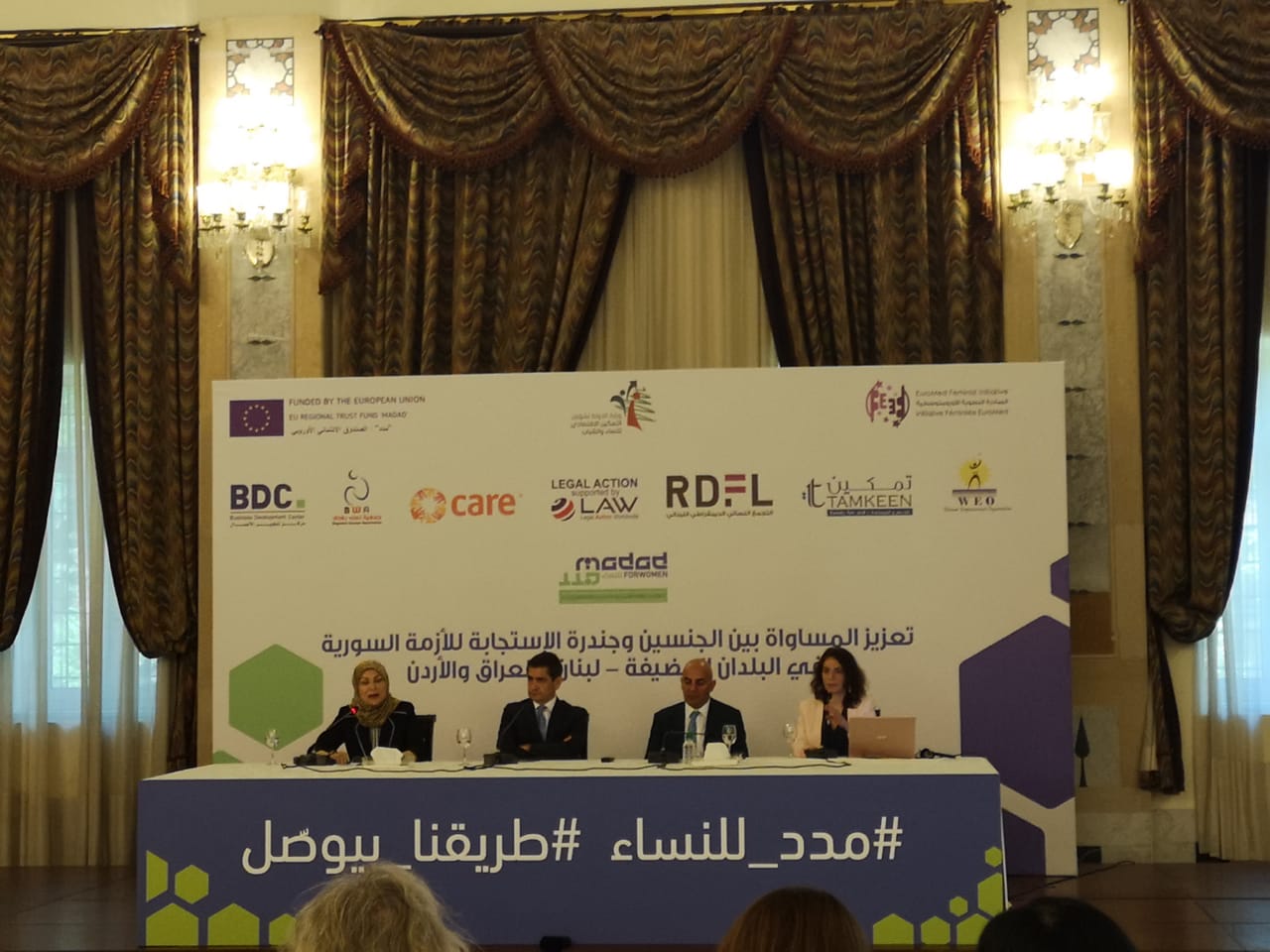 Share on email
Share on facebook
Share on twitter
Share on whatsapp
URDA, represented by its PR Coordinator, Rosy Haddad, participated in the regional conference held this morning, July 03, 2019 at the Grand Sérail, Lebanon to launch “Enhancing Gender Equality and Engendering the Syrian Crisis Response in Host Countries” project in partnership with Ministry of State for Economic Empowerment of Women and Youth, the European Trust Fund and EU Regional Trust Fund in Response to the Syrian Crisis, the EU “MADAD” Fund.
The Conference started with the Lebanese national anthem, a video of the project and the campaign launched by Ministry of State for Economic Empowerment of Women and Youth under the title “Our Road Has No Dead Ends” . Then, the minister H.E. Violette Khairallah Safadi gave a speech about the project’s goal to protect women and enhance their economic participation by providing the necessary support and encouragement to apply to public office; in addition to her emphasis on achieving social integration for them to achieve the SDG Goal #5 “gender equality”.

Let's imagine what would have happened if Lebanon, Jordan and Iraq refused to host refugees.

She added that this project is mainly aimed at Syrian refugee women, because in her opinion: ” there is not a single woman who would want to leave her home and become homeless at her own will”. She then invited the attendees to imagine what would have happened to us if they were in such women’s shoes. Mrs. Johnson pointed out that a tortured mother raises desperate children, a hungry mother will always raise hungry children, and a poor mother will always raise miserable children; this is what creates extremism and eventually lead to terrorism.
The President of the Council of Ministers, H.E Saad Hariri expressed his hope that all humanitarian associations participating in the conference would unite to achieve this goal. The Ambassador of the European Union,  Christina Lacey was pleased to launch such pioneering pilot project to support women in Lebanon, and agreed with the executive director of the women’s initiative, Poriana Johnson, and asked a question: “Let’s imagine what would have happened if Lebanon, Jordan and Iraq refused to host refugees.​”
URDA representative, Rosy Haddad stressed the need to guide humanitarian efforts to provide Syrian refugee women with their right to a decent living, especially those who lost their husbands in the crisis and comprise the largest percentage of refugees.
A woman is half of the society; it’s her duty to take her own rights, but it is our responsibility to support her and strengthen her to overcome all the obstacles and lead her way toward the ultimate gender equality.
Previous
Next