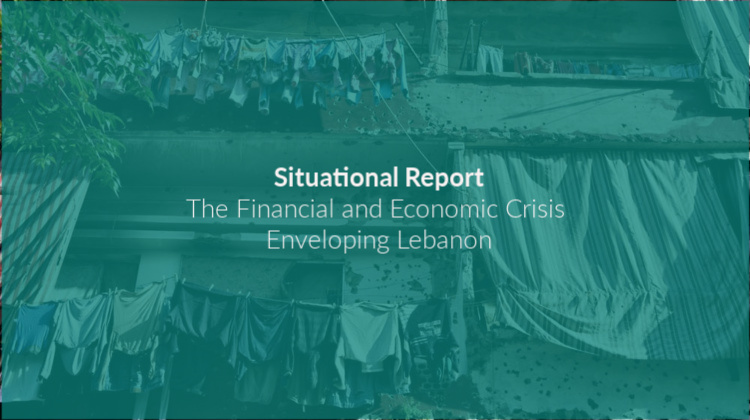 This situational report was prepared based on the current political changes and events, as well as the economic crisis affecting the Lebanese throughout the country. In addition, this report is based on several available reports and studies which have been submitted by URDA’s field team.

As the Lebanese bid farewell to 2019 which has been an eventful year crawling with economic crises and changes, the new year opened up new avenues that vary between the possibility of mobilizing solutions that respond to people’s anxieties or entering into a new series of crises that may have serious repercussions. Hunger has become an issue for most Lebanese in the current stifling economic and social crisis, where many families can no longer afford food and many children sleep every night without dinner after long days of feeding on crumbs.

This is not based on fairytales or fables, but instead, it is a painful reality that faces Lebanon today.

Poverty is becoming more widespread due to the impact of the current political and economic crises and the lack of any development plans in a country where debt has reached 73 billion US dollars. The political situation reflected on the Lebanese economy and lead to discouraging internal and external investments, as well as closing a number of institutions which resulted in preventing job creation and increasing unemployment rates.

The study revealed an increase in the number of poor people in Lebanon by 61% since 2011 and until 2019 while 28.55% of the Lebanese population lives on less than $4 per day. In Beirut and the majority of Mount Lebanon area, the percentage of those living below the poverty line is 15% and raises up to 60% in the outskirts, mainly North in Akkar and Denniyeh, South in Marjiyoun and Hasbayah, Bekaa in Baalbeck and Hermel and within cities like Tripoli and Saida.

International reports mention unemployment rates that exceed 20% among youth, and due to the disparity in official statistics, the number of the unemployed in itself has become a dilemma that needs to be solved. According to a report on the number of unemployed people that aimed at finding out why young people are being radicalized and subjected to social diseases, 36% of Lebanese youth are unemployed.

It can be said that such red indicators in the Lebanese economy were caused by the size of corruption that plagues the Lebanese government institutions; where the country ranked 143rd out of 180 countries in the 2017 corruption classification by Transparency International.

In conclusion, it can be said that the phenomenon of poverty in Lebanon is linked to many economic, social, political and sectarian variables and does not lie solely on one of them, so when the country decides to face poverty, it must first work on a genuine and effective social safety net, in addition to promoting equality between the governorates and setting a serious program to fight corruption at all levels.

The cries of concern of employees in Lebanon rise day by day as a result of the measures taken by a large number of companies since the beginning of protests last month, including arbitrary termination and salary cuts in the absence of any accurate statistics until this moment.

Some companies are calling their employees and requesting them to sign their resignations in return for financial compensations. Such a method has already succeeded in persuading and terminating a number of them, while others have sued by resorting to the Ministry of Labor.

The price of the Lebanese pound against the US dollar in the black market continues its gradual rise, where the LBP/USD exchange rate varied between 2425 and 2525 LBP for each 1 USD.  The fluctuation in the dollar exchange rate is affecting the prices of consumer goods in the Lebanese markets, which have led to the rise in the prices of goods. As citizens who are saving hard currency rushed to exchange it and make major profits in the current situation, the Lebanese pound’s savers and employees whose salaries are pain in LBP found themselves aggrieved, first because they could not benefit from the currency difference, and secondly because of the rise in the prices of goods due to the rise in the dollar exchange rate; thus, resulting in the decline of their purchasing power.

Some financial and economic experts have made it clear that the impact of the rise in the dollar exchange rate on employees who are paid in Lebanese pound, who constitute a large segment that includes all public sector employees and most private-sector employees, is negative in terms of the decline in their purchasing power.

The economic downturn has led to a decline in demand and thus to a decline in prices. However, the rise in the dollar exchange rate affected the prices of imported goods and pushed them up.

Some luxury food items have begun to disappear from the shelves of large commercial markets and shops like some legumes, frozen agricultural materials and baby milk products. Concurrently with those pressures and the current protests, many complaints were circulated among citizens on social media about the rise of consumer goods prices, especially food items, which negatively impacted their purchasing power and consequently the consumption basket that reached a record within two months, as prices rose between 40 % and 100 %.

If economic pressures continue, Lebanon will face a food crisis, mainly that Lebanon lacks food security and depends on importing food products from abroad where it imports all sorts of wheat and legume, as well as meat, cattle, fruits, vegetables, and medicines all while paying for all these items with USD, which is already difficult to get in the current situation.

How Does URDA Deal with this Crisis?

Because URDA’s vision lies in being the safest refuge for all the disadvantaged individuals in Lebanon and a lead reference in the humanitarian field, URDA intervenes in helping Lebanese families affected by the current crisis by providing basic needs and assistance during the winter season, so that Lebanese families throughout the Lebanese governorates and areas receive distributions according to their needs. The aid will vary between food parcels (canned and fresh) and other winter in-kind assistance.

URDA targets a number of the neediest families and is distributed as follows:

It is worth noting that URDA’s first humanitarian initiative after the crisis landed in Kfarmatta region in Mount Lebanon, Tripoli, Akkar, in addition to Bekaa and Saida, to conclude its distributions for December in many affected areas after its direct communication with the municipalities of each region. Communications are still going with the Ministry of Social Affairs to coordinate with them on such initiatives.

The Lebanese Most Important Needs In The Current Crisis

Based on the above, and on the observations of our field relief teams, urgent relief supplies are presented as follows:

The prices of daily food and consumer products continue to rise, especially as goods and new imported batches run out. Under the shortage of dollar liquidity, importers and traders resorted to exchange shops to buy the US dollar at an exchange rate of 2,500 Lebanese pounds yesterday. In light of the widespread hunger and the difficulty of buying food commodities including canned and other products, families should be provided with full food parcels (canned and fresh).

Currently, Lebanon is witnessing a cold wave where temperatures have reached below zero in some areas thus closing the roads and hindering transportation, so we have to deal with the low temperatures and provide warmth to families in need. There is a permanent need for heating fuel along with heaters, winter clothes and blankets.

We hope that, in cooperation with various donors and relief organizations, we will be able to secure the needs necessary to overcome the impacts of the damage caused by the crisis and to support those most affected by it.