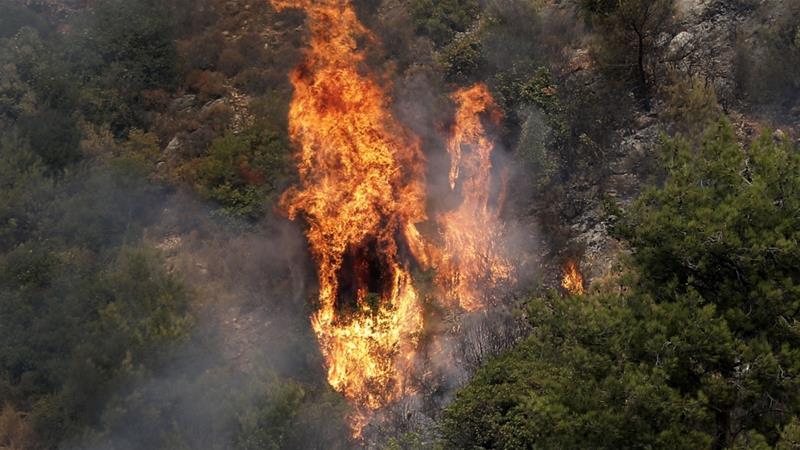 Raging Forest Fires in Lebanon: How and Why?

Forests are the lungs of the earth and they play a vital role in the absorption of harmful gases and the release of pure oxygen. In addition to this key importance, they:

So, Why Do Fires Happen in Lebanon?

Usually, fires erupt after long summers, yet at a lower level. At that time of the year, trees would have their lower branches dried while the top branches have grown and increased in greenness. Meanwhile, all the plant cover that grew in spring would be dry and the sun has vaporized any water or remaining greenery. Each mid-October of every year, a heatwave reaches Lebanon and lasts for almost 30. During this period, high-pressure winds from the southern desert areas especially Egypt and the Arabian Peninsula blow in Lebanon and is locally called, the 40s or 50s wind and are loaded
with 3 factors that cause a fire to break out and extend:

These three natural factors do not cause fire by themselves as they need a little flame that will force fires to spread and increase in a short period of time.

Such a flame can be caused by several factors:

Previous
Next
We can’t also ignore some of the factors that cause a fire even though they are usually excluded:

The Latest Fires in Lebanon

Over the past few days, Lebanon fell under the impact of a heatwave that started on Sunday and continued with temperatures above its usual seasonal rates, hence reaching 38 degrees Celcius on Monday. High temperatures have led to various fires throughout Lebanon from north to south. The wind has contributed to the spread of fire and the destruction of several forest areas.

The fires spread over thousands of acres in a matter of hours reaching a number of residential buildings near the forests; high-pressure winds have lead wildfires to burn out of control.

The Lebanese Red Cross announced in a statement that it performed first aid at the field hospital in Damour: 72 first aid cases in place, 4 cases in Meshref area, 6 cases in Al Naameh area, 4 cases in Dibbieh area, 2 cases in Zikrit area, making it a total of 88 cases.

One case was transferred to Labib Abu Daher Hospital in Saida, 2 cases to Saint Charles hospital in Hazmieh area, and 7 cases to Serhal hospital in Al Rabieh area; a total of 18 cases, most of whom were suffering from health conditions including shortness of breath, suffocation, blackouts and minor burns. The Lebanese red cross teams are still ready to provide humanitarian services when needed and they are receiving calls on the free emergency line:140. On the second day of this environmental crisis, the youth Salim Abu Mujahid passed away due to a heart attack while he was helping firemen in extinguishing the fires; he was immediately transferred to Saint Charles Hospital.

The Union of Relief and Development Associations in Lebanon proposes the requirements below to prevent fires: